$20US. That’s the daily wage of 30% of humanity. Divide that by 10 to discover the average daily wage of an Afghan family—$2 per day. Meanwhile, these same families in such dire economic survival mode, are owners of great wealth. It’s as if they own a mansion full of food and comfort, yet someone has hidden the keys from them. These same families, citizens of the world’s poorest countries, own up to 20% of the world’s copper, oil, gemstones, lithium, cobalt, and other resources. How can this be? Smuggling, crime, politics and capital leverage control the resources of developing nations. Meanwhile, the true cost of economic disparity is too large to measure: worldwide health crises, war and genocide, and countless arrays of crime, organized and otherwise.  Further, add the unthinkable human intellectual loss due to juvenile "PTSD" and lack of education for the 5% (Rand Corporation Study) in every city and country who, given a chance with some peace and education, would be motivated and capable of helping to solve for our planet’s future.

With the advent of Blockchain (invented in 2008 or 2013, depending on how one measures its inception and development) and the powerful new use case described here, we can address critical economic and security problems. For the first time in human history, smuggling, a frequent catalyst and enabler of violence, crime, and national loss of resource wealth, can be severely diminished without additional police action or border guards. Certainly, border guards serve many purposes and will always play a critical role in reducing crime and protecting national sovereignty and trade. Nevertheless, they face the obvious impossibility of protecting every millimeter of a national boundary around the clock. And, some are undeniably compromised by bribery. This new application of Blockchain will protect national resources for the betterment of a nation’s citizens, via Fair Trade and Anti-smuggling. The solution enhances security, protects funding for infrastructure and education, and suffocates support for criminal activity.

Once fully developed, this Blockchain technology use case will be a game-changer for any resource-rich country facing a smuggling issue. This is not only for Afghanistan. It will transform the economies of impoverished nations currently exploited by smuggling. Villages and families will feel the impact. For example, 90% of the world’s $75B/year sales of colored gemstones originate from 47 countries - as mentioned, often the poorest of the poor. 50% to 80% of gemstones are smuggled across national boundaries without regard for the law, or regard to the lack of Fair-Trade wages of the workers, or the education and infrastructure needs of the very land where the minerals were found. Often the "high density" value of smuggled gems goes hand and glove with money laundering, corruption, human trafficking, weapons trade, and drugs. 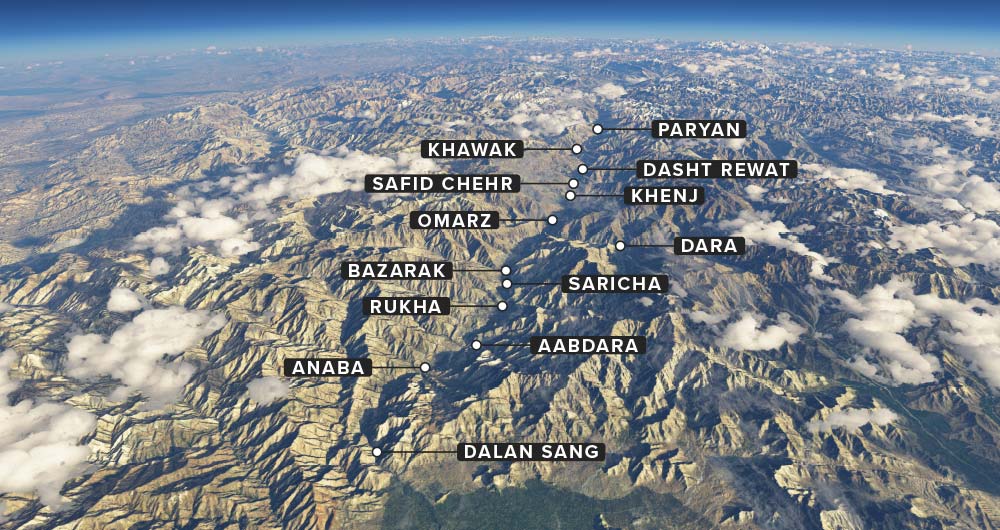 An Apple a Day

Now, for the first time, the true owners of this wealth that is unfairly removed from the ground on which they stand, the villagers and the countries of origin, can benefit proportionately. This is possible through the implementation of a Blockchain chain of custody, geo-tagging and time stamps, smart contracts, fair trade digital identification and signatures, and export tracking that promises no-delay and corruption-proof accuracy.

The Internet has helped to educate the world’s poorest, and has allowed instant communication. "The Internet of Value," Blockchain, will reallocate $Trillions of resource wealth—via Fair Trade, and Chain of Custody ethical sourcing. The People’s natural resources should fuel the People’s health, quality of life, and education.

What is the "value" of recapturing the natural resources of Afghanistan or other mineral-rich nations? To put it into perspective, consider the valuation of Apple Corporation is only 30% of the projected value of the mineral wealth of Afghanistan. Apple employs 123,000 workers, with an average wage of $124,000 per year. Afghanistan’s mineral wealth is worth three times the valuation of Apple Corporation. Dubai and Jeddah, among other cities and nations, have leveraged their mineral wealth to enable an amazing quality of life. Barrels of oil are difficult to smuggle out of their countries. Value-dense gemstones are easy to smuggle. Without some means of changing the friction points of liquidity and value all the way to the point of ultimate sale, smuggling and related crime will continue unabated. This is the point of Blockchain. Afghanistan can experience the same impact to her quality of life as have most of the oil nations (Venezuela’s poor governance and corruption is the notable exception).

When Trust Can’t Be Trusted

In the years 2018 and 2019, we are currently at the same developmental stage with Blockchain as was the "Internet" in 1994. Creating this Blockchain use case today is much like imagining Uber or Netflix in 1994, when the Internet was only considered useful as a brochure. Current Blockchain applications are little more than "brochures" that add marketing value. Some claim "anti-blood diamonds" and others claim "fair trade." Maersk and IBM are beginning to add true value in a logistics use case. They are on the right track in solving marketing dilemmas for their goods. However, what this solution proposes for Afghanistan is more aptly described as adding to the "brochure"... inventory control, purchasing, payment methodology, and shipping methods. No one has yet moved much beyond marketing or tracking their corporate wares to create a Blockchain application for the betterment of exploited countries and villages. The proof of concept is solidly in place, via HyperLedger, Ethereum, IBM, and others spending billions of dollars on Blockchain and Distributed Ledger crypto-development. It is here to stay. Blockchain will be as ubiquitous and invisible and SMTP, HTTP, and other protocols we depend on every day for mail, file transfer, and website delivery.

The unquestioned trust of security found in the encryption and distributed Blockchain directly answers our era of faltering human trust in universities, law enforcement, government, the media, currencies, and most other human institutions. As it provides an unquestionable "immutable" means of trusting information value, identity, time, place, movement, and contract fulfillment, Blockchain is here to stay. Blockchain will be integral to the medical field, identification, taxes, payments, insurance, land acquisition, purchases of luxury products, security of data, biometric and fraud-free elections, credentialing of education or clearances, escrow, banking, and thousands of other topics. Transaction costs will be cut by 90%—and the chances of fraud cut by 99.9%.

For Gem Stones and natural resource protection, this anti-smuggling, anti-crime use case is powerful. Just as shame and legislation impacted illegal Ivory sales beginning in 2012 to 2016, after generations of destruction and abuse, Blockchain can press the American market (responsible for over 35% of all gemstone purchases worldwide) and much of the rest of the civilized world into accepting only colored stones that are fair-trade, anti-crime, anti-smuggling, anti-money laundering, anti-drugs, anti-human trafficking, anti-cartel, and legally exported for the good of the villages and the economies of the stone’s origin.

In this modern era, the momentum of the purchaser is to insist on Fair Trade, to insist on a "clean" stone that is free of criminal provenance or handling. Forcing all natural resources through the proper legal channels makes everything that does not receive the Blockchain stamp "questionable" or "likely illegal." The value and liquidity of any suspicious item, once the Blockchain is in place, drops dramatically. This strongly incentivizes legal methods of mining and exporting and fair trade certification, helping the workers, helping the support villages and suppliers, and enabling the government to help its citizens with schools, power, internet, and roads.

It is a powerful incentive, in the case of gemstones as an example, to be able to sell a legal, clean, and fair trade stone with 100% certainty. No one wants to pay $300,000 for a necklace, only to be asked at the Academy Awards or a cocktail party whether they are funding ISIS or the Columbian cocaine cartel. "Are you supporting violent extremists or money laundering with that stone?" The ability to answer with confidence is priceless: "No, actually, I’ve ’met’ the miner and his family via Blockchain immutable time and geo-stamped photos. Would you like to see the Blockchain D-App, the conflict-free Afghan mine the beautiful gem came out of, and the proof of legal chain of custody, from lapidary to export to the jeweller? I have the D-app here on my smartphone. Would you like to see? This stone is Fair Trade and crime free."

The Clock is Ticking

What happens if Blockchain is not developed and implemented for anti-smuggling? Eventually, like trees in parts of Africa, there will be nothing left to take. Unlike trees, natural resources can never be replaced. The economic loss to the nation and the resulting likelihood of criminal anarchy may be permanent at that point. This solution can be a win for the honest and hardworking, for the villages, the government. Though the initial programming will be somewhat costly since there are 5,000 Blockchain programmers of this level as of 2017, compared to 19 million java programmers, the Blockchain foundation will be laid for 100 other valuable purposes in Afghanistan, and will change everything. It is a win for Afghanistan to be at the forefront. At some point it will be a win for the impoverished in 47 countries that are mineral wealthy - and yet pummeled by smuggling and crime. The technology now exists to change the paradigm and harvest one’s own wealth for the people who stand on it.

King, Hobart. (2017). Gemstone Production and Consumption in the US. Available at: https://geology.com/gemstones/mining-gemstones.shtml [Accessed 1 Sep. 2018]

Amini, M. (2017). At Stake in US Military Efforts to Stabilize Afghanistan: At Least $3 Trillion in Natural Resources. Available at: https://www.cnbc.com/2017/08/18/trumps-afghanistan-strategy-may-unlock-3-trillion-in-natural-resources.html [Accessed 1 Sep. 2018].